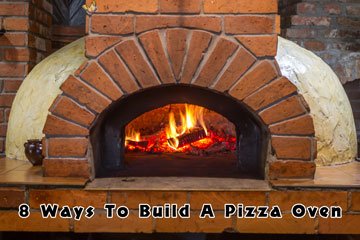 If you’ve got the itch to build your own pizza oven, then it’s a great addition to your garden. They can reach the temperatures needed to cook true Neapolitan pizzas, which your home oven simple can’t reach. Not to mention the outdoor cooking, pizza parties, and the added value to your house which a pizza oven will bring.

No longer do you need to buy an expensive kit, pay a fortune for fire bricks or need to be a skilled masonry. The following videos show people who have built ovens in unique ways, and I’ve rounded them all up for you for inspiration.

If you need to know a bit more about the cost of an oven, then I’ve got some comparisons in my article how much does a wood fired pizza oven cost?

1. Build It Over An Exercise Ball

If you’re not building with bricks, then you are probably going to use a material that needs to dry and harden, like cement or clay. You need something as a support structure so that you can build up a dome without it collapsing before it can hold its own weight. You can craft something by hand with wood and cardboard, or you can choose the smart idea someone had and use an exercise ball.

They can be inflated, then held in place while you use it as a guide for layering cement, clay or bricks. The outer materials can then be left to dry until it is strong enough to hold it own weight. The ball can then be deflated and used for another day.

These are inexpensive and readily available online, and will produce a perfect dome shape. You don’t need to be very skilled to layer a material on top so works well for a beginner. The video shows how good the finished product can look.

Pros:
Cheap to buy
Easy to build upon

Cons:
You can’t build a large oven as you are constrained by the size of the ball you can get

2. Use Vermiculite – The Super Cheap Insulator

Vermiculite is a mineral that is perfect for building a pizza oven. It can withstand high temperatures so it won’t crumble, it expands and contracts easily so that it won’t crack. It is also porous and acts as great insulation, so these properties lend it to being used as refractory insulation regularly.

It is also readily available, and cheap. It is used in gardening for flower beds, and so can be picked up from a gardening shop as well as a builders merchant. You can get a 4 cubic/100L bag online, and you’ll see it is a fraction of the price of a brick oven. It can be bought coarsely ground which is best, and then mixed with a refractory cement to make a concrete suitable for use in a pizza oven.

Once it is mixed, you will need to layer it on a structure and allow it to dry. You can use an exercise ball as mentioned previously, or build your own with cardboard, wood or chicken wire. It needs curing fires of increasing strength otherwise it may crack with the excess moisture inside.

This is the most traditional method of building an oven. Bricks are built up into a dome by laying layers of bricks, with each layer at a larger inward angle.

You will need around 200-300 bricks. Regular bricks aren’t designed for the high temperatures of a pizza oven, so it is required you get fire bricks. These are designed for ovens and furnaces and will ensure that they don’t crumble over time. You will also need refractory mortar for the same temperature resistant qualities.

Bricks by themselves don’t insulate to a great degree so an insulation layer is needed. This can be a ceramic fibre blanket clad over the brickwork, or refractory cement with vermiculite. In the video the creator then finishes off the build with a render for a waterproof layer.

4. Build An Oven With A Smoker

This video shows an extremely well built brick oven, which also doubles as a smoker. Who doesn’t love smokey meats?

A wood fired oven works as a smoker as it combines the two important requirements – low heat and smoke. The usual way to hot smoke meat is the ‘low and slow’ method by cooking over an extended period to give tender results.

If your oven is built with insulation then it will retain heat for a long time. You can fire it up to maximum temperature, let the fire die down, then the residual heat absorbed in the oven can be used for slow cooking for hours later. You can add smoke by adding soaked wood chips to the embers which have been pushed to the back of your oven. You then add your meat, keeping it away from the direct fire, and regulating the heat with your oven door if the oven is particularly hot for the initial stage.

The video below shows how the creator built a smoker on to the side of the pizza oven. This was to mimic the usual set up of a smoker, where an offset fire box burns away from the meat, and the hot smoke travels over the food in the larger chamber – which is his pizza oven in his case. A brick in the oven wall opens the gap for the smoke, and is replaced when cooking pizza.

I imagine he did this so he had better control over the temperature he was smoking at as the fire is less direct. To maintain the cooking temperature is probably easier as he can just access the fire box and add more fuel, rather than having to deal with firing the pizza oven directly, checking the temperature and replacing the door.

Pros:
Easier to smoke things than a regular pizza oven

An alternative brick oven to a dome shape, can be a barrel vault. It looks like a tunnel, and has a rectangular base shape rather than round like its dome cousin.

The barrel vault oven is traditionally used as a bread oven, which is likely down to shape. Circular pizzas go in circular ovens, and rectangular bread loafs fit better in a rectangular oven. If you’re a commercial baker baking lots of loafs, you can fit more in the barrel vault.

They are also easier to clean out ash as the opening is larger and they are rectangular.

Dome ovens reflect heat efficiently down to the oven floor from all angles, giving it even high heat and making it perfect for pizzas. Barrel vaults aren’t quite so efficient – if you make a fire at the back, you won’t get that reflective heat to the front. That’s likely why you see dome ovens as the preferred option for pizza ovens.

They do look great though, which might be a pull factor in your decision on which style to build.

Cons:
Less efficient (more fuel, longer to heat up)
Not as good cooking results as a dome

6. Build An Oven Out Of Clay

Probably the oldest way to create an oven is with clay. It’s an abundant material worldwide and cheap to buy. Usually mixed with sand to stop it cracking when fired. It will be physical work as you need to mix the sand and clay together – usually by stomping on it.

To build the dome, a mound of sand can be used as a base support. As seen in the video, the clay mix is built up in ‘bricks’ around the sand until the clay layer is finished. Once the clay has firmed up enough to hold its own weight, a door can be cut into the side and the sand can be removed.

Clay itself doesn’t insulate that well, so an insulation layer needs to be added which can be natural materials such as straw or wood chippings. Using vermiculite or a ceramic blanket is better but not so traditional if sticking to natural materials. Its not weather proof either so it needs a cover, waterproof render or an outer brick layer.

Cons:
Will crack eventually
Less efficient than other builds

An oil drum or barrel is a creative way to start off your oven. It has a good shape to reflect heat back into the oven, so anything this shape works well.

The metal alone won’t be enough to retain any heat, so you’ll end up burning through way too much wood. It needs more mass and insulation, so you can see this creator has lined it with fire bricks which will absorb some heat, and handle the high direct temperatures of the flames.

They have insulated the outside with some ceramic fibre blanket which is highly insulating can withstand extreme temperatures. The hearth is also insulated, under a layer of fire bricks, which is an important step to ensure a hot oven floor.

The outer layer has been covered with a sheet of metal to cover everything up. As you can see, the build has taken a lot of work and not for the faint-hearted or unskilled. The final piece looks great though.

Cons:
You need to be a skilled metal worker
Probably not as efficient as others
Need a barrel

Another more advance build, this guy shows you how to take another existing item and recycle it to make an oven – this time a beer keg that has been cut in half.

He lines the keg with refractory concrete to insulate, but would have been better to use some vermiculite in the mix to make it insulate even better, and also make it lighter as vermiculite is porous and light weight.

It differs from the barrel build in that this has an external burner added to the oven. This allows you to pack the burner with fuel and then this flame and heat is pulled into the main oven. It’s a similar mechanism to some portable pizza ovens that are on the market such as the Ooni or Roccbox. You can put any fuel here such as wood, pellets, charcoal or even hook it up to a gas burner.

He’s got a lot of impressive metal work skills, and he says it took him a long time to build, but nonetheless it is a great build and cooks him pizza in 90 seconds. You could see this as being fairly portable – perhaps serving pizzas as a quirky food stand.

Pros:
Super cool and unique
Portable
Has a gas fitting

Cons:
You need to be a skilled metal worker
Need a beer keg

You can see there are some different ways to build an oven ranging from the traditional types which have been used for centuries, and super modern examples with recycled items and modern tools. It’s up to you to pick one based on your skill and materials to hand. Whether you are just starting your search for the perfect pizza build, or half way down the route, I hope you have some more inspiration from this article.

Building your own oven can be a great little project for your garden, and a great way to spend some time outdoors. There is lot’s of resources online to help you, and if you want to know a bit more about costs then check this article out. Good luck in building your perfect oven. 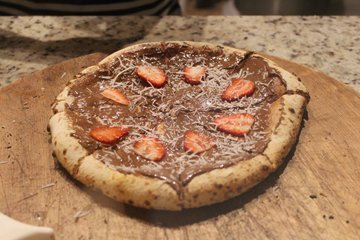