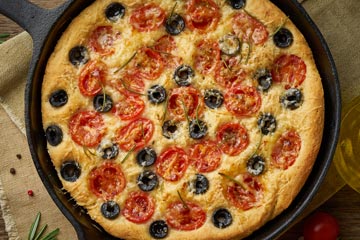 Focaccia is a flat bread from Italy that is soft and chewy from liberal amounts of olive oil. Focaccia dough is very similar to pizza dough, so you can use your usual dough here if you like. The toppings can be swapped for other herbs and vegetables, just remember the sea salt flakes.

In the wood fired oven, you can bake this in a cast iron skillet which works well with its tall sides and nice even heat distribution from the thick metal. Build the fire up to a high temperature before letting the oven cool for baking, or use up the left over heat from a pizza session.

For more bread recipes in your wood fired oven, check out my post on 15 breads to cook in your pizza oven. 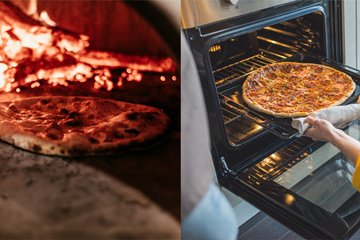